Slendytubbies is an online horror Game, which is a result of the combination of popular horror game Slender: The Eight Pages and the children’s television show Teletubbies. The game features two modes; Singleplayer and Multiplayer. Unfortunately, the game is not available on ZeoWorks at the moment. The point of the game is to collect ten bowls of Tubby Custard while avoiding Tinky Winky who is the threat of the map.

The White Teletubby is the main protagonist and the only hero of Slendytubbies. His goal is to collect all ten bowls of Tubby Custard without being caught by Tinky Winky. He is dressed in white cloth and wears a top hat which has the texture of leopard or cow skin. He does not have an antenna.

Tinky Winky is the oldest, tallest, wisest, and without a doubt the fattest of all the Teletubbies, as well as the primary antagonist of Slendytubbies. He is dressed in purple cloth and sports a flipped triangle as an antenna. His face resembles that of a gray humanoid, with empty eye sockets and a wide mouth with visible teeth. Tinky Winky ate an infected Tubby Custard. Tinky Winky has been driven to insanity and has thus murdered all of his previous friends, and now The Guardian is the next on the line. To help the player(s) in the player’ or players’ quest to find the Tubby Custards, the frame of your screen will flash black when Tinky Winky approaches the player, however, he will also let out an ear piercing scream and he will teleport violently so the player have to watch out. Staring at Tinky Winky for too long or running into him will result in death, thus ending the game.

Dipsy is a stubborn and often a selfish Teletubby who will sometimes refuse to go along with their ideas, and is the second victim the player encounters. He is darker skinned than the others and is dressed in green cloth, as well as having a dipstick as an antenna, hence his name — Dipsy. Dipsy can be found in the Teletubby House, decapitated, laying down in a pool of blood with his own head mere inches away from his body. Dipsy may have been Tinky Winky’s first victim seeing as how he was killed in the house, though Dipsy may have ran here as an attempt to try and escape him. Like Po and Laa-Laa, Dipsy also has a Tubby Custard nearby him.

Laa-Laa is the kindest and most caring out of the Teletubbies, looking out for them. She is the first victim the player finds. She is dressed in yellow cloth and has a spring-like object as an antenna. Laa-Laa is found near the lake, and is laying on the floor, bloodied and bruised. Beside her is another Tubby Custard. Approaching her, which is necessary to grab the Tubby Custard, results in her rising up and jumpscaring the player; which may suggest she was never killed in the first place, just severely injured. Afterwards, however, she will lay back down, meaning she most likely died of blood loss. If the player approaches her after this event, she will not raise back up again.

Po is the smallest and youngest of the Teletubbies, and commonly the last victim the player sees throughout the game. Po is dressed in red cloth and has a circle as an antenna. Her “face” lacks any content, such as eyes, nose and mouth; only containing several blood splatters and stains. Po’s television screen appears to have been shattered during her death. She appears to be hanging by her neck on a branch of a tree. It is revealed that Tinky Winky did this during his road to insanity. Below Po is a Tubby Custard, and will do nothing to the player as a result.

Noo-noo is a blue vacuum cleaner-like object, the housekeeper and the guardian of the Teletubbies. He is short tempered and often gets annoyed by the antics caused by the others, which in turn makes him suck up their food as a form of punishment. Noo-noo is seen inside the Teletubby House along with Dipsy, however, he is the only character spared and left alive. Despite this, he is seen constantly spinning around in circles with steam coming out of him. This could be due to panic, but the steam implies that Tinky Winky was not able to murder him like the others, forcing him to merely malfunction Noo-noo so he does not get in the way. However, this could just be Noo-noo pretending to be broken.

Announcers are gray trumpets with orange speakers that have black spots. On the map it appears only three Announcers, which none of them are infected. First Announcer is located near the Teletubby House and Po’s tree. Second Announcer is near the first one, however, the second Announcer appears to be on the ground and smoke is coming out of it, which appears that this Announcer is broken. The third Announcer is hidden in the mountains. If any player gets close to it, the trumpet will play cover of the song “What’s Up” by 4 Non Blondes. This is a reference to a video called “HEYYEYAAEYAAAEYAEYAA” (which is a scene from the video “Fabulous Secret Powers” by slackcircus).

There is only one Map with three different time periods:

When choosing the Map’s time period. 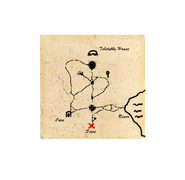 A customizing option is available when the player opens the in-game menu by pressing “E”. Customization is visible on the lower left of the menu. To customize the player’s character, click on it and paste your skin links to the desired body area. Customizing the character is really useful if playing with more than two people as it allows the players to distinguish one from another.

Community content is available under CC-BY-SA unless otherwise noted.
Advertisement