The Secret Lair (originally known as Secret Layer) is a recurring location within the Slendytubbies series.

It is a secret installation located in the underground of the Main Land. As shown in Slendytubbies III, a part of the underground serves as a monitoring place for The Guardian, and it is only possible to access it from a passage hidden under a large rock and an implied secret passage inside the House.

The Secret Lair on its own had a few differences over the game, but remained similar. It contains a passage filled with water, in a way similar to sewers, and several pipes accessible via stairs, allowing access to two rooms, one being a storage room and another being possibly a laboratory room. In Slendytubbies III, the location is slightly bigger and has metal barriers at the edge of the platforms and an additional lit area belonging to The Guardian.

The Secret Lair is also possibly the location from where Teletubbies and the numerous New Borns are made, by the Teletubby Creation Machine. However, in the cancelled Slendytubbies III: The Apocalypse DLC, this was taking place in another underground location named Sewers.

The Secret Lair is one of the first maps in Slendytubbies II, available since the release of the game, along with the Main Land, which was the sole location of the first and original game.

It is wandered by two New Borns, the only pair of enemies in the game. In Versus, the host of the game plays as a New Born.

It looks very close to its appearance in the previous opus, albeit with a few differences, such as an additional room and more equipments in the corridors. It is wandered by two New Borns, once again the only pair of enemies in the game.

The Secret Lair returns in Slendytubbies III in both Campaign and Multiplayer.

The Secret Lair is where the first part of Chapter 1 ― “A New Day” takes place. It only takes place in the area inhabited by The Guardian.

After having seen the massacre, The Guardian attempts to contact the Satellite Station, without success. Realizing he has no choice but to reach the station on foot, he needs to take his night vision camera from a storage room, but the player will first need to unlock the metal door blocking the access to the room. The player will have to maximize the pressure of the door with canalization.

Once equipped, a power outage happens and three New Borns appear from nowhere. The player will have to reach the exit without being spotted by neither of them.

In Collect and Versus, the Secret Lair is wandered by two New Borns, as usual. It is also available in other modes: Survival, Infection, and Sandbox. 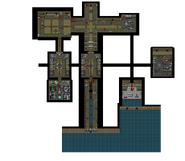 Map of the Secret Lair.

The Slendytubbies III map in black — note the unused room on the bottom right corner.

Community content is available under CC-BY-SA unless otherwise noted.
Advertisement